In fact, membrane waves were first introduced by Tanimoto (1990). He shows that they are an analogue for surface waves, either Love or Rayleigh waves, when we restrict ourselves to a narrow frequency band. Here we look at waves on a sphere at their simplest form of propagation. That means there is no dispersion. And no attenuation. And well, no anisotropy. I'm sorry to show this formula now, but I just have to (only a tiny one).

This is all there is to solve. The phase velocity c depends only on the location on the sphere, the displacement u of course also in time t and so does the forcing term f (which we set to a really boring one).

So what? Call it a toy model. Realistic? No. Unless you consider a slightly more realistic approach. What I mean by that, is that we can put a phase velocity map on our sphere.

These maps can be obtained for either Love or Rayleigh waves and at certain distinct frequencies. The map here is derived by crustal informations (rather than by inversion of phase anomalies) for Love waves at a frequency of about 35 seconds. They have an area resolution of 2ºx2º degree (you just ask Lapo for it. He's doing these and other great inversion maps). 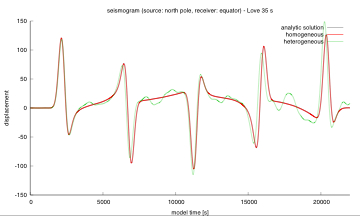 Now let us propagate the model waves on that. Dispersion isn't anymore an option, since we're only looking at a predefined wave frequency. But we can compare effects of heterogeneity with the homogeneous one (and draw some nice pictures as well).