Finite-frequency tomography of the European-Mediterranean region

A two-step approach was followed here to reveal the seismic 3-D shear-velocity structure of the European-Mediterranean region.

A detailed description of the work can be found here:

First, we inverted an enriched, high-quality phase-anomaly database (Fry, 2008) of Rayleigh waves for phase-velocities at several, distinct periods (about 600,000 observations in total). In order to compare the theoretical descriptions involved in the inversions, the exercise was done for both ray-theoretical and finite-frequency-derived sensitivity kernels. From these phase-velocity maps, dispersion curves at every location of the high-resolution parameterization over Europe and the Mediterranean region are constructed. 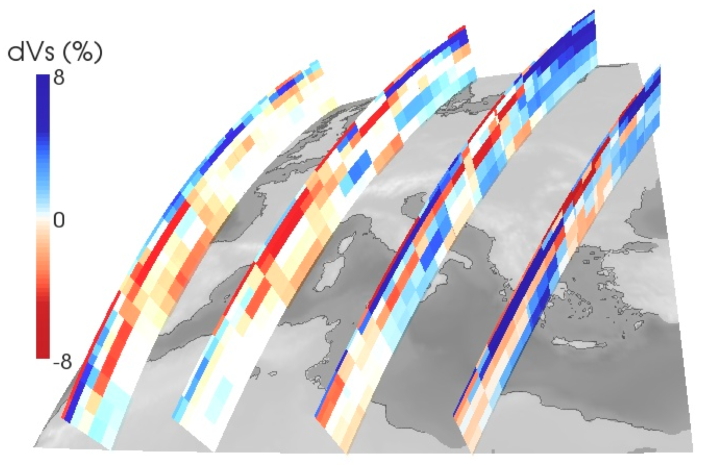 Second, an extensive model-space search by a combined Monte-Carlo and gradient descent algorithm was conducted for each dispersion curve to find the corresponding profiles of shear-velocities (Vs) with depth. The advantage of this two-step approach is that together with such a Monte-Carlo inversion, we are also able to give an estimate of the uncertainty in the obtained model parameters (since we know now also the posterior distributions; in case you're interested, have a look at the paper Peter et al. 2008 cited above).

The resulting Vs-pertubations (in percent %) with respect to PREM values of the European-Mediterranean region can be downloaded in ASCII-format (6.3 MB): mediterranean-Vs-model.txt .

This model is derived using the finite-frequency dispersion curves (not ray-theoretical ones). It is given at regular lat/lon-locations (using 1 x 1 degree steps) and depths between 40 km and 395 km (using 5 km step intervals). The file format is:
# lat(deg), lon(deg), depth(km), Vs-perturbation(%), PREM Vs(km/s).